ExRotaprint is renown for its fascinating 1950s-era buildings. They form an essential part of ExRotaprint’s identity and served as the inspiration and driving force behind the development of the project.

After the Rotaprint company went bankrupt in 1989, the site was left without any future prospects. Thanks to Berlin Regional Director of Conservation Prof. Engel, the “enormous operational complex” located at Gottschedstrße 4 and Bornemannstraße 9-10, and the building at Wiesenstraße 29, were placed under strict historic preservation protection in 1991. The production halls located in the center of the block between Reinickendorfer Straße and Uferstraße were torn down in 1992. Granting historic preservation status to the architecture was controversial; “Bunker jetzt Baudenkmal” (Bunker, Now Protected Architecture) was the headline in the Berliner Zeitung. But in the words of Prof. Engel: “The felicitous architectonic reshaping of a Wilhelminian-era neighborhood development with the formal language of modernism is one of the finest examples of 1950s architecture in Berlin.”

After the Second World War, a large portion of the former Rotaprint site lay in ruins. Only several Wilheminian-era buildings situated around the inner hub of the complex could be saved. In the early 1950s, productivity increased rapidly, creating demand for new production spaces. As a result of its burgeoning commercial success, Rotaprint was able to add prominent new buildings to the architectural ensemble through the end of the decade. Rotaprint decided to hire young architect Klaus Kirsten, and, with his architecture, was able to present itself as a modern and progressive commercial operation. According to the Berlin Regional Director of Conservation, the architectural ensemble of Wilhelminian architecture and 1950s-era new construction is an unparalleled example of “…the long tradition of industrial culture in Berlin in which a building’s formal qualities were perceived as important aspects of its architectural artistry.”

In the early 1950s, Rotaprint began to rebuild and redesign the Wilhelminian-era commercial buildings that had survived the destruction of the war. The brick and masonry façades were simplified and plastered white, and windows were modernized. All in all, the existing complex was to have a lighter and brighter feel and tie into the new buildings visually, forming a comprehensive unit. Low-rise buildings replaced the destroyed frontage buildings formerly located at Gottschedstraße 3-5, and now flanked both sides of a new factory gate and the wide entrance into the operational hub of the complex. The production facility was extended into the heart of the city block situated between Bornemann-, Ufer-, and Reinickendorfer Straße. Here, large-scale production halls were built just south of the large operational hub. Hans Heinze was the leading architect for most of these initial structural alterations and expansions to the Rotaprint factory. 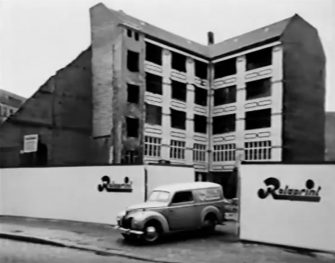 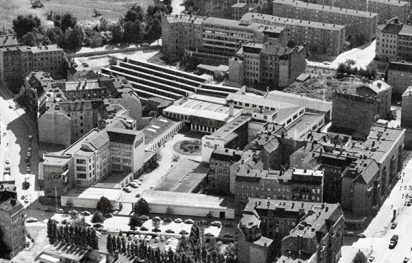 In the following years, Rotaprint forged a modern identity for the entire site. Purchases of additional parcels of land allowed the company, previously centered only around the operational hub, to create a streetside image for itself. Architect Klaus Kirsten was commissioned to design several new, architecturally ambitious buildings.

Rotaprint first commissioned Klaus Kirsten with the reconstruction of Building 1. This traverse wing formed the southern end of the large operational hub and served as a transition zone to the production halls. Building 1 was the main building for the entire complex. It had the same cubic volume and foundation walls of the original Wilhemenian-era traverse wing and transformed the simple old workshop building into a highly-visible modern structure that fully embraced the style of the 1950s with a glassed structure reminiscent of a theater foyer during this era. The prominant upper level served as a work area for engineers and company management. Featuring a contemporary mono-pitched roof, the central space opened out to the north and south via large-scale windows, providing a view of the entire complex. In order to serve the function for which it was designed, the Technical Office incorporated a number of striking design details. The frame surrounding the “glass box” was painted standard Rotaprint red, colorful mosaics covered the walls of the stairwell to the upper floor, the staircase handrails were custom designed, and large-scale glass partitions divided the upper floor into separate areas.
Building 1 was also the first building ever designed by the then twenty-six-year-old architect. He completed his studies at the Technical University of Berlin the same year he received the commission. 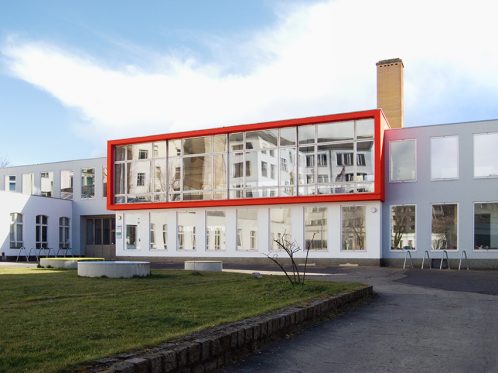 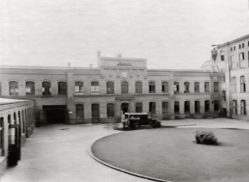 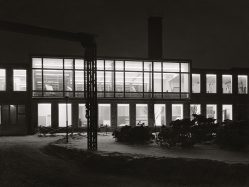 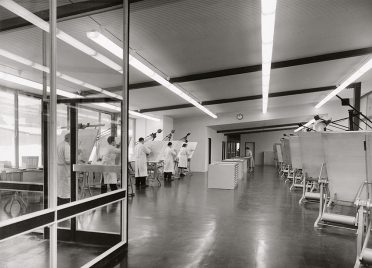 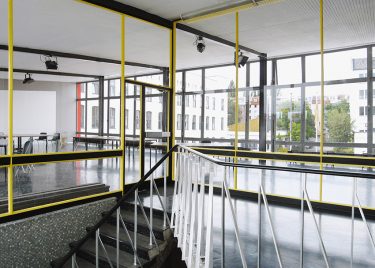 After the lot on the corner of Gottschedstraße and Bornemannstraße was purchased, Klaus Kirsten was commissioned to design a modern street-front building for the rapidly expanding Rotaprint company. The design was completed in a short period of time and, after several abrupt changes, the building remained partly unfinished. The corner ensemble was connected to the rear wall of the Wilhelminian-era commercial building, constructed in 1904, and shifted the old building structure back visually from the street. Kirsten designed a series of four distinct modern buildings around the perimeter of the block. These were connected both internally to one another and to the old building facing the courtyard. Kirsten placed a single-loaded office wing with a sculpturaly pronounced gridded façade on the firewall that runs diagonally towards the corner block. Vertical concrete pillars hold the façade elements in place from bottom to top; the façade extends out prominently from the actual outer wall. A single-story production hall with a perimeter band of windows and round skylights is situated in front of the office wing. The adjoining two-story stairwell, featuring a prominent staircase behind the open, glass façade, might have been conceived as a secondary main entrance to the administrative wing of the complex, as an early sketch suggests. However, only two floors of the building were constructed and the structure still features a temporary roof today. The distinctive top section of the structure forms the highlight of the open corner tower at the corner of Gottschedstraße. In floorplans, the tower-like building conforms to the perimeter of the street and lot edges; offset volumes define its cubic shape, giving it a highly sculptural quality. A bay window jutting out over the corner stands out prominently, orienting the building toward the main entrance of the complex. Architectural plans from 1958 show the five-story building as a seven-story tower. For reasons unknown, construction on the building was halted in November 1958 and was never completed at a later date. Even a final surface treatment was not applied; the concrete formwork surface is purely a result of the construction process and was not intended as a design element. Presumably it would have been plastered over. Despite its impressive presence, the corner tower is an unfinished building that, when compared to neighboring structures, feels too small and truncated. A sketch by Klaus Kirsten from 1958 shows his original intentions: a tower rising high above the entrance powerfully exerting its presence over the nearby streetscape. 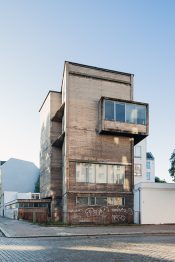 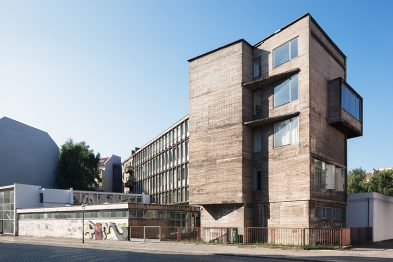 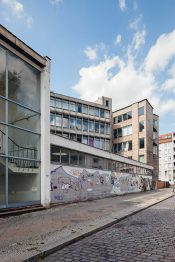 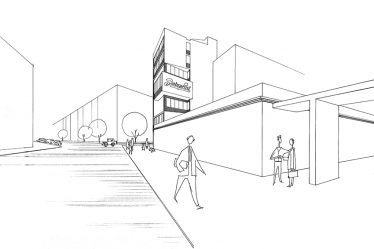 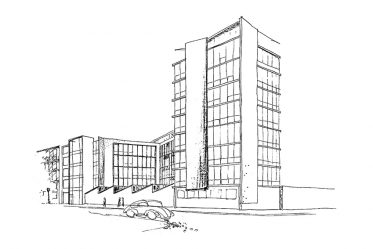 The building, designed by architect Otto Block, was constructed at the same time as the work conducted on Gottschedstraße. The six-story, highly rational industrial architecture completes the perimeter block of buildings on Wiesenstraße. In the back, it was supplemented by a single-story production hall with extensive strip lighting and a 6-meter-tall, shed-like roof construction. Today, the cooperative Wiesenstraße 29 eG owns the buildings by means of heritable building right.

Another architectural highlight of the complex is the carpentry and training workshop building, which Klaus Kirsten designed at the diagonally opposite back end of the complex at nearly the same time as the corner ensemble of buildings. In this case as well, the new building was added onto an existing firewall and also uses the existing staircase. The five-story building is the tallest building in the complex; receding behind it is the rear-facing old building. Like a modern cubist sculpture, this tower formed the spectacular end point of the single-story production halls—at the time located to the south—and can be seen from all around. Playfully stacked cubes shifting back and forth, which are almost completely glazed on the west-facing side, bring out the enormous sculptural qualities of this “tower of boxes.” A cubic form, jutting forward and topped with a butterfly roof, forms the apex of the building, which mirrors the shape of the roof added to rear section of the old building at the same time. A white finish plaster surface unites old and new, emphasizing the building’s modernist character. The plans from 1957 show that an extension was also conceived for the workshop building along the entire firewall, similar to the corner ensemble. Merging this with the rear-facing commercial building would have created larger interior spaces for various uses. This is also the reason for the simple treatment of the building’s north-facing façade, easily legible in the provisional brickwork of the individual stories. 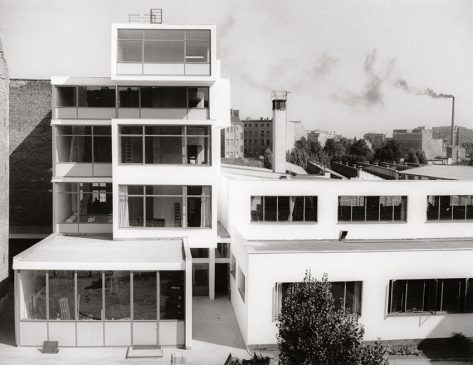 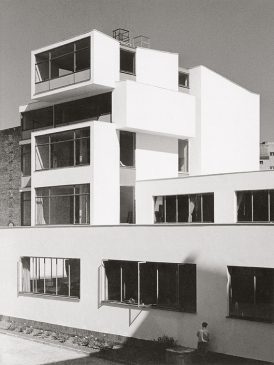 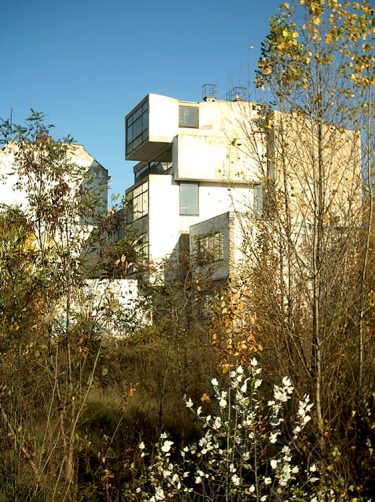 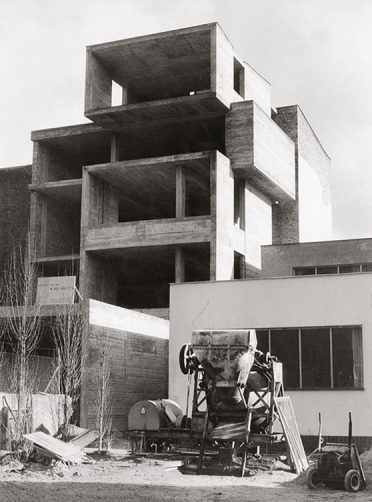 In the years of rebuilding following the war, the Rotaprint company retained its inner-city production location, gradually expanding and extending it to meet the company’s growing demands for space. The entire Rotaprint factory complex demonstrates how a site can be transformed into a modern production facility by continuing to build and add to existing structures, creating a symbiosis between old and new buildings. In the 1960s, Rotaprint planned several additional extensions, but these were never built. In the mid-1970s, the company began to experience financial difficulties, and further modifications to the structure of the complex were rarely executed. Unfortunately, the Rotaprint factory is no longer preserved in its entirety. The production halls, which were not under monument protection, were demolished in 1992. The buildings comprising the overall complex that have been under monument protection since 1991 are located at Gottschedstr. 4, Bornemannstr. 9-10 and Wiesenstr. 29. These have been largely preserved in their original state and are gradually being renovated.
Details on the renovation and construction works here …

The basis for the awarding of monument status by Prof. Helmut Engel, Berlin Regional Director of Conservation (in German)
Download PDF here

Additional information on the architectural monument and the architects Klaus Kirsten and Heinz Nather in the monograph published by ExRotaprint:
Link to the book